Fresh updates are at the bottom of this page!

In this article I introduce a new model-based fault injection method implemented as a highly-customizable Simulink block called a Fault Injection Block (FIBlock). It supports the injection of typical faults of essential heterogeneous components of Cyber-Physical Systems such as sensors, computing hardware, and network.

FIBlock is available at GitHub and at MathWork website.

In the next two chapters I'll present more details on FIBlock and an example of its implementation on a test Simulink model.

How to set up FIBlock

Failure rate distribution is not supported yet! Bit flips, Time delay, and Noise faults may have some bugs :D In different FIBlock instances, the 'name' of the block in GUI must be different (must be an integer number).

The presented FIBlock is developed as a MATLAB Simulink custom library block and implemented as a masked subsystem containing MATLAB Function block with additional Simulink Clock block as second input. FIBlock also supports, what I call, a chained fault injection. Second output of a FIBlock emits a trigger flag. This output signal could be connected to the second input of other FIBlock. In case of the fault injection, emitted trigger flag connected to the different FIBlock, will force trigger the fault injection in the last one.

Fault injection is performed by the instances of the Fault Injection class, which are being created for each FIBlock with the parameters specified by the user. I've developed the Fault Injection class as an Object-oriented programmingbased implementation of the ErrorSim functions. MATLAB Function blocks support code generation with Simulink Coder, therefore it is possible to generate code for a controller.

1) Types of fault. Stuck-at: the block output stays constant, preserving the latest correct value before the error occurrence; Package drop: the correct output is replaced by the specified Value, emulating a package drop; Bias/Offset: the defined positive or negative Bias value is added to the block output; Noise: a random noise value is added. The Boundaries are defined as the percentage of the correct value; Time delay: a delay is introduced into the signal. During the delay the value is same as was before the fault activation; Bit flips: the defined Number of bits are inverted in the binary representation of the correct value.

3) Fault effects. Once: an error appears only one time during a simulation; Constant time: the block produces erroneous output during the specified time period; Infinite time: the block produces erroneous output until the end of the simulation; Mean Time to Repair: normally distributed MTTR regulates the time of the error effect.

An example of application

An example Simulink model is also available at the same directory of FIBlock at GitHub and at MathWork website. 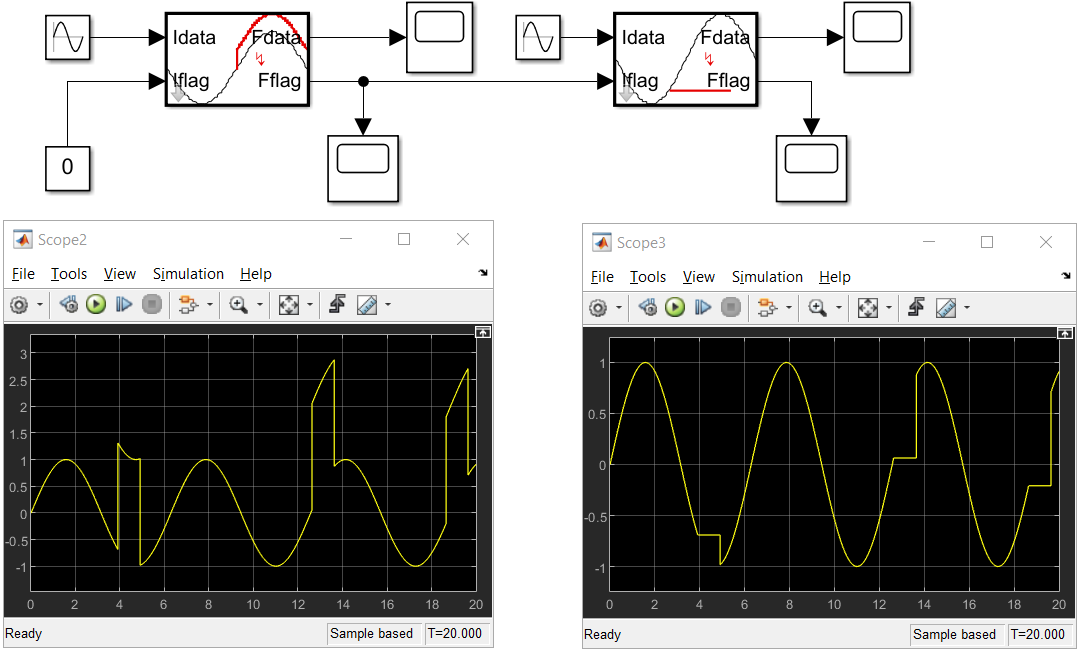 An example of a Simulink system with two FIBlocks.

In this simple example I'll explain the chained fault injection with FIBlocks. Two input Sine waves with the same parameters a bsubject to the fault injection experiments. First (left) FIBlock will inject 'bias/offset' value fault stochastically with probability 0.001, fault duration is 1 second, and the fault value is 2. Second (right) FIBlock will inject 'stuck at current value' fault. Note, however, that the fault probability is deliberately set to 0 (zero).

In the first FIBlock there is also a second input signal being a constant 0 (zero) signal. The second output of this FIBlock is being a second input of the second (right) FIBlock. Remember that fault probability of second FIBlock is set to 0 (zero). Because of the chained fault injection, whenever the fault is activated in the first FIBlock, triger signal will force trigger fault injection in the second FIBlock as well. 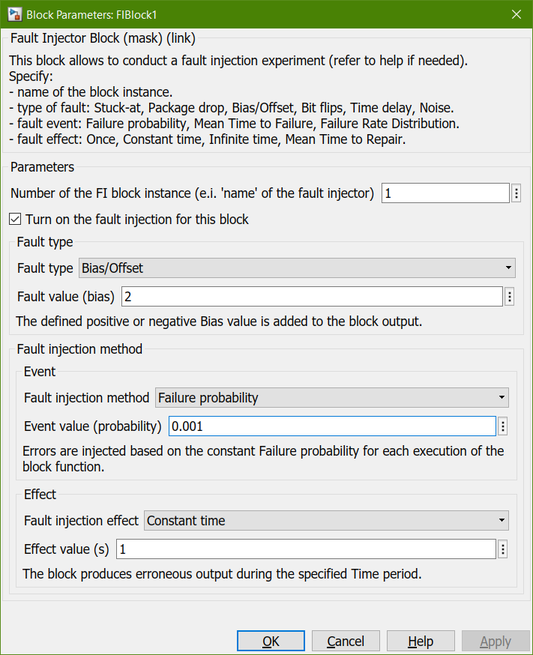 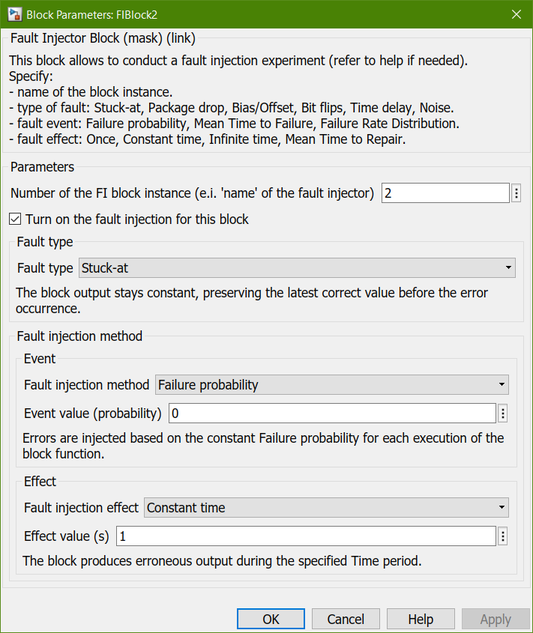 Recently presented a case study paper at the ESREL 2020 conference. So in case you need to cite the 'FIBlock paper' here are e-proceedings. Physical publication will follow. Please cite as: Fabarisov, T. et al. "Model-based Fault Injection Experiments for the Safety Analysis of Exoskeleton System." Proceedings of the 30th European Safety and Reliability Conference and the 15th Probabilistic Safety Assessment and Management Conference, 2020.

Added support for the deterministic fault injection. It is now possible to choose the exact time step at which a fault will be injected.

Added support for a base Workspace variables as input in the GUI parameters. 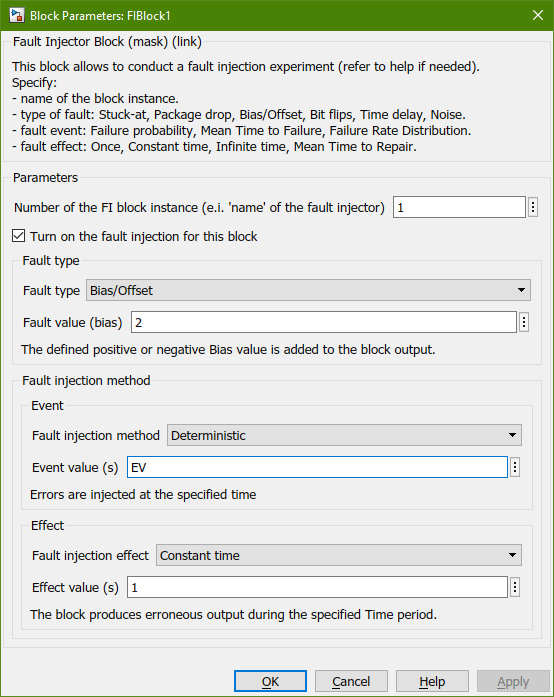